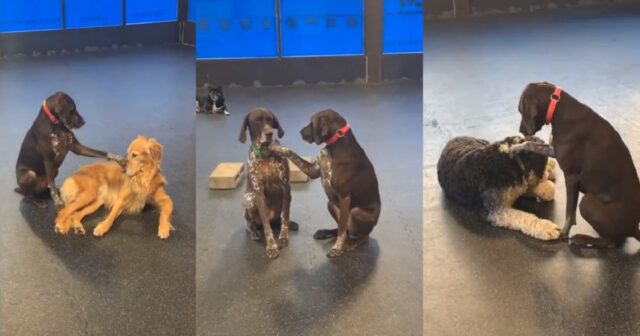 Dogs are remarkably friendly creatures. Dogs love connecting with humans and other dogs. Other than being extroverted animals, they are intelligent enough to express their affection in many unusual ways. Ruby is a friendly German shorthaired pointer who is on a mission to pet every dog in the daycare.

Her base of operation is The Den Doggy Daycare. She is the canine source of cuddles. Her brother, Miles, isn’t interested in giving pats. He only wants to be showered with his sister’s affection. Ruby’s unusual ways caught attention.

Ruby gives love to the other pooches every time she visits. Alanah Lorraine, another dog’s loving owner, took a video of Ruby as she plays with the others. She always had Miles first inline, then would resume tending the needs of other dogs.

The video was uploaded on TikTok and had garnered over 144.8k likes, and 620.4k views, it was also shared by the famous We Rate Dogs on their Twitter page, gaining another 7.7 million views. Ruby kept on giving affection to her fellow dogs and became an online sensation. Comments bewildered in as netizens are amazed at her rare style. Some people have never seen a dog pet another animal. That is why they were amazed.

Videos show that Ruby’s kind efforts did not bother other dogs. More videos followed, and Alanah had those clips compiled. Ruby became overwhelmingly famous. Alanah never expected her uploads to be viral.

Netizens have been overwhelmed and crazy about Ruby’s manner. Most of the comments stated that she knows how to demonstrate it interestingly, others, said that she craved attention or food. All we know is that the domesticated dogs we have now descended from wolves, thus making them pack animals. They love connecting. There is always an intelligent and affectionate member of the pack who loves to be loved.