Home Dog Stories After Taking Home A Dog Surrendered By Her Owners To The Shelter,... 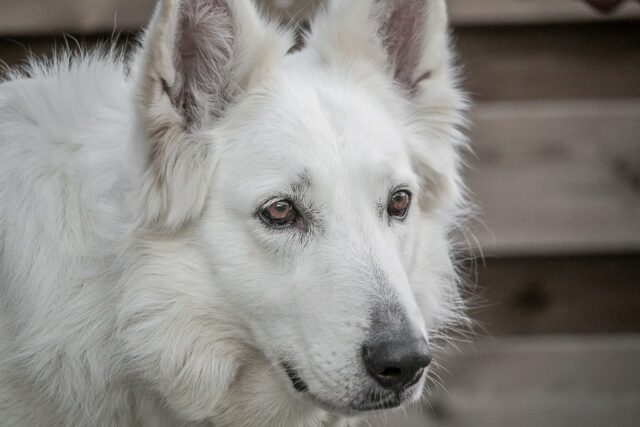 Gemma is a beautiful white German Shepherd that unfortunately got afflicted with Demodectic Mange. Her owners refused to get her treatment, and the condition got severe. When almost all of her body was covered with the disease, the dog’s family decided to surrender her to a shelter in California.

The dog was very much in pain, and it got worse when she moved around. Living in the shelter will not help her a lot. The sick pooch needed to be with a family where she could get more attention and care. This is where a kind woman named Jolene stepped in.

Jolene is an adoption counselor for an animal rescue group in Santa Clarita, California. She also volunteers her free time at the local shelter. With the help of the charity organization, they got Gemma out of the shelter, and she got her treatments. The first time they bathed her, they had to sedate the poor pooch so she wouldn’t be in pain.

As Jolene and Gemma were already developing a connection, she took him home so that she could give her round-the-clock care. In just a week, her progress was visible. Her beautiful fur started growing back, and she even started gaining weight.

Gemma’s tummy started growing rapidly, and Jolene took her to a vet. That’s when they learned that she was pregnant, and no one knew about this. After a few more weeks, the lovable pooch became a new mom. She gave birth to five healthy puppies.

Jolene now had six dogs to care for, but she didn’t mind. Gemma proved to be an amazing mom. The attentive pooch took very good care of her puppies while continuing her treatments for mange. After about two months, the puppies were all found good homes.

When gemma fully recovered, she was put up for adoption, and it didn’t take long for her to find a new family. Jolene became emotional when it was time to say goodbye, but she was more than happy for the dog that became an important part of her life.