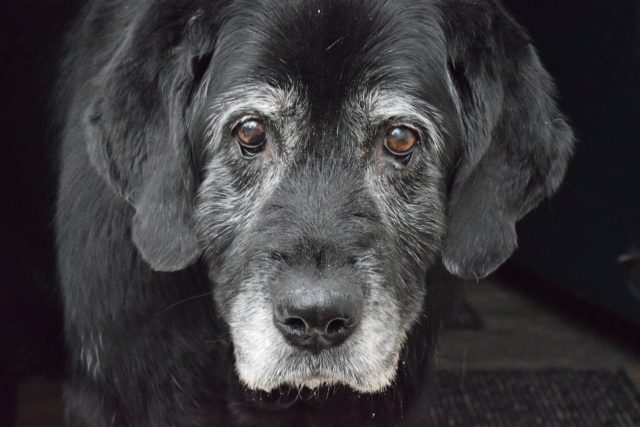 Dogs experience different emotions when they are at the shelter. For some, it’s fun because they have a temporary place where they are fed and loved. Other dogs perceive the shelter as a place that’s stressful, and confusing. This was the case of a black Labrador mix who was turned over at the Dallas Animal Services by her owner.

The fourteen-year-old dog was dropped just some days past Thanksgiving. This made the information written on her intake card even more confusing.

Leaving her there was already bad enough since she is a senior dog. What made things worse was her owner wanted the shelter to euthanize her. She was not in the best condition when she was turned over. Aside from being underweight and having walking difficulties, she was also positive for heartworm.

Fighting for another chance in life

Peanut’s story soon reached animal advocates. They shared her story on social media, hoping that people will help save her. This led Peanut to Tommy Bull from Crowly, Texas. When he saw the post, all he could think of was saving Peanut.

Everything was going against Peanut but this did not bother Bull. In fact, this made him more determined to save her. He asked Texas’ CAMO Rescue to help him pick up Peanut. The staff carried Peanut out of the shelter because her walking was very wobbly. Bull immediately hugged Peanut to let her know that she’s in good hands.

His wife also fell in love with Peanut, who decided to call her Ettie. The video uploaded by Watchdog Mary on YouTube shows how happy Ettie is with the Bulls. She’s given food that addresses her nutritional needs. They also gave her medication for her heartworm and arthritis. Interestingly, Ettie found her forever home in time for the holiday season.