Home Team Barking Howling Dogs Trapped On A Cliff Got Rescued By A Couple By... 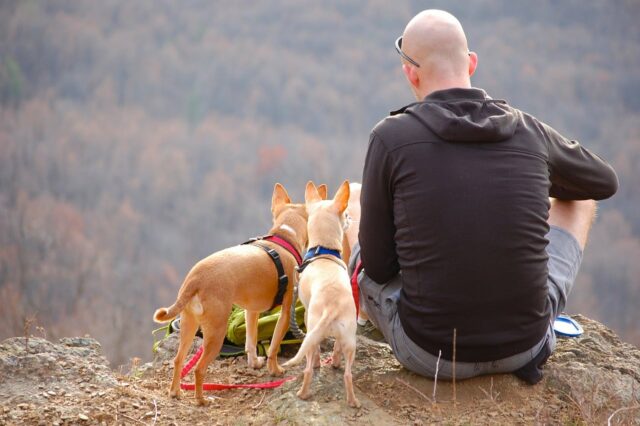 A young couple was planning to climb off the canyons when they heard something similar to dog cries. At first, they thought it must have been the coyotes in the area. But as they went over to the climbing area, they heard the cries again. Though they were convinced that the cries they heard were coyotes, they decided to walk further and check it out.

When they looked right up, they saw two heads looking over a cliff in the canyons and it turned out to be two dogs standing on the cliff. They first assumed there would be some hikers up there looking for the dogs but no one was there. And with no sign of incoming help for the trapped dogs, they decided to do the rescue on their own.

The guy named Brody climbed up while his partner, Katie, stayed at the bottom. Upon climbing up, Brody didn’t see where the dogs were and it took him a bit of time to find the shaded cave over the cliff where they stayed.

Both dogs were just frozen probably due to fear and possibly dehydration. Brody went up to them and they immediately gave him kisses, like they were just happy to see someone. The couple knew they were abandoned dogs not only because of their temperament but also because they still had their collars on.

After making sure that the dogs were calm, Brody got them out of the cliff cave and planned their descent. Using all of his tools and gear he fashioned dog harnesses and secured them. Once the dogs were all set, they started going down the rope. Luckily, the dogs kept their calm and they just sat down on Brody’s legs as they slowly went down.

Katie was waiting for them at the bottom and as soon as they were unsecured from the harnesses, she gave them food and water. She temporarily named them Meatball and Parmesan since their dog was named Spaghetti. Despite the names that go well together, Spaghetti was a bit cautious around his tasty new friends. The couple abandoned their climbing plans and instead tried to get the dogs in a better condition.

They were lucky a ranger drove by them at that time and they were able to get to the nearest town. They were already getting attached to the dogs but unfortunately, they couldn’t take them home. So, they looked for the nearest shelter and sadly parted ways with them there.

The couple was positive they would soon go to loving homes with how sweet they were despite what they had gone through. Surely soon enough both Parmesan and Meatball found their forever homes. Even if Katie and Brody weren’t able to share their home with them, they’re happy knowing these dogs will get loved again.