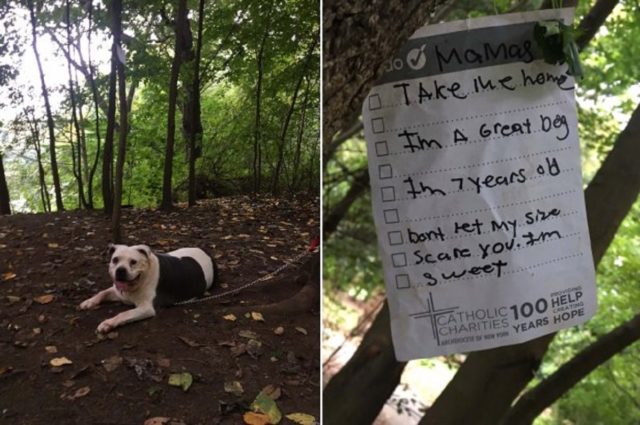 A dog walker in Brooklyn named Eric Maus was taking his clients Gauda and Lily for a walk through Prospect Park on a Monday morning. He was surprised because it turned out that this will be not an ordinary day for him.

Eric saw a big pit bull tied to one of the trees as he was making his way to the waterfall. He came up to the dog asking where his owner was. There was no one around the dog, and he thought that something was not right.

As he moved closer to the pit bull, the chubby dog did not even move. He was so calm and was just lying there with his tongue out. Hanging on the same tree where he was, was a note on a piece of paper telling that the dog’s name is Mamas; he is a 7-year-old pit bull, and he may look aggressive because of his size, but he is really sweet. 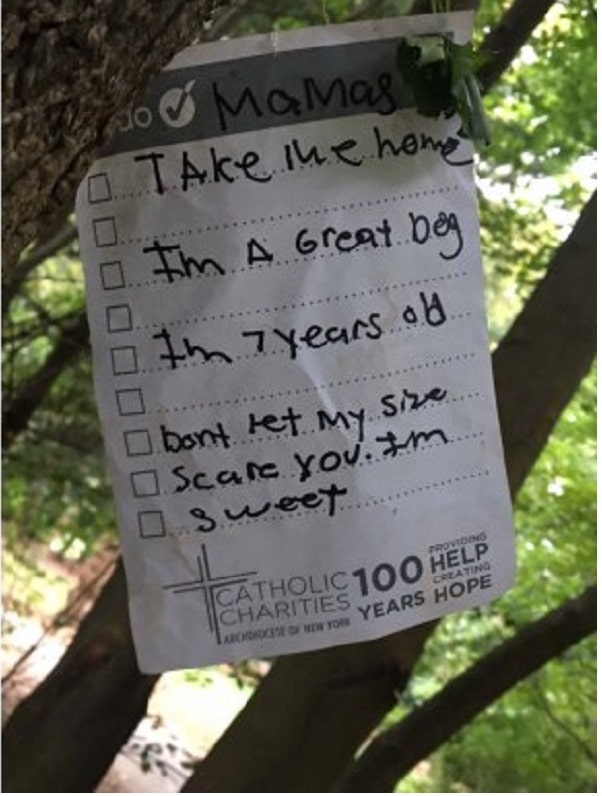 The note was also asking for him to take the dog home. Eric didn’t know what to do, but he knew that Prospect Park is not a good place for lonely dogs like Mamas. So what he did was to post Mamas’ picture on Facebook and state the situation.

One responded and agreed to meet Eric and Mamas on the park. The Good Samaritan picked them up from there to bring the dog to Sean Casey Animal Rescue, a shelter nearby.

Mamas seemed so hesitant when she walked towards the car, but when they arrived at the shelter, she jumped out and seemed to be excited. She might have felt that she was taken to a good place where she will be taken care of.

Everything will be fine for her. A spokesperson who spoke in behalf of the shelter told The Dodo that she was doing well and that she liked everything in the shelter. Mamas is now waiting for someone who will adopt her and Eric knows that whoever adopts her will be very lucky because Mamas is really a sweet surprise.

Thanks to our friends from The Dodo for sharing with us this story.