Home Dog Stories Special Needs Dog Finally Gets Adopted After Being Returned At The Shelter... 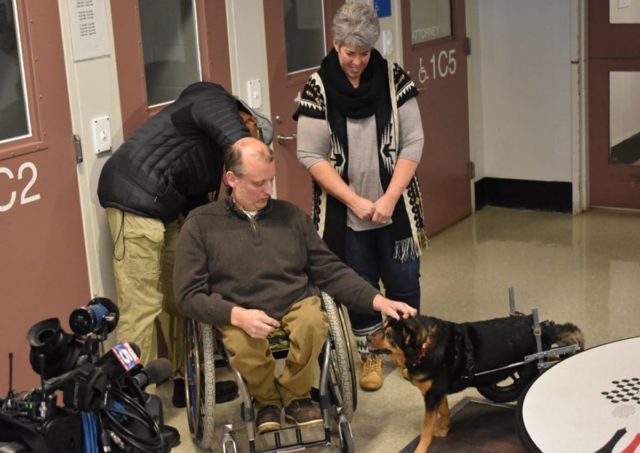 The shelter staff of Gwinnett Jail Dogs Program all thought that Bandit would be under their care until his last breath. Bandit has been going in and out of their shelter for about four times because he still has not found the perfect family that would give him the special kind of care that he needs.

Many people were interested in adopting Bandit, but they were all terrified of caring for a puppy with special needs. The staff of the Georgia-based shelter all adored the sweetest and friendliest pup among the pound, but they all want nothing more but to him to find his fur-ever family.

It was a bitter-sweet goodbye today with Jail Dog Bandit. Bitter because he has been with us since 2014 and is adored…

The employees felt that all hope is lost, and that Bandit would never get the chance of being loved by the right family, but the universe had other plans for the disabled pooch. One couple saw Bandit’s story in a Facebook post, and they immediately wanted to give him all the attention, care, and love that Bandit deserves.

Darrell and Sue Rider were browsing Facebook when they read Bandit’s story. They were not terrified or overwhelmed that Bandit needed a special kind of care because it turns out that Darrell also happened to be in a wheelchair himself.

Bandit’s new fur dad, Darrell, shared that he could not help but feel interested at Bandit because they both have the same kind of paralysis that requires them to use a wheelchair to move around. Darrell and Sue knew what it was like to live life in a wheelchair, so they wanted to give Bandit a chance to be loved.

The couple felt a deeper connection with the disabled puppy, so they decided to adopt him. The stars aligned for Bandit because someone was finally willing to give him a chance.