Home Dog Videos This Dog That Was Afraid Of Cardboard Boxes Found His Space With... 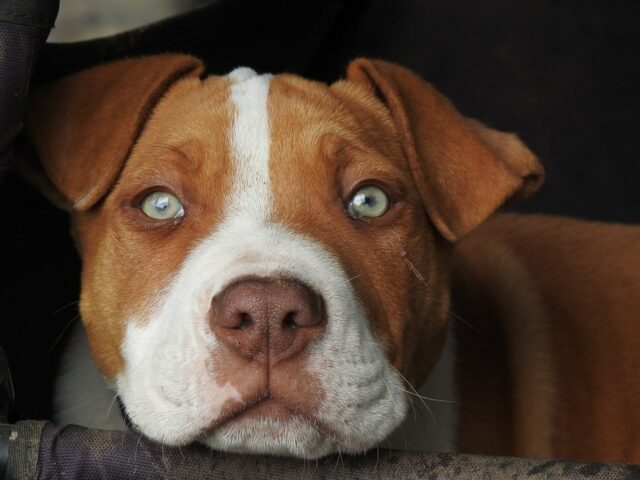 Stray dogs often display a lot of fear and anxiety. The world can be a scary place for them. This is why experienced dog rescuers do their best to make every dog feel comfortable and safe.

Cody was a pit bull stray and was extremely fearful. He was caught in a neighborhood somewhere in California. His rescuers often had to use multiple leashes because he always chews them.

John, the rescuer who found Cody, swore to give the dog all the time he needs. He would often wait several minutes for Cody to feel comfortable with a leash. The process of getting him out of his kennel takes a while as well. Despite the hassle, John doesn’t mind the slow process.

John would visit Cody every day and take him out for a walk. Once Cody is outside, he’d show little resistance and cooperated. This routine was repeated until Cody would voluntarily follow John outside without the need for a leash.

One day John noticed Cody avoiding a cardboard box near his home. It was a sign that this dog was still very fearful. However, that was also a perfect opportunity for John to motivate Cody to conquer his fear.

Regular walking sessions helped Cody feel more secure. Since he was brought to a dog park with a lot of people, he had no choice but to trust humans. John felt Cody becoming better and more trusting.

Eventually, the time came when John had to part with Cody. Every rescued dog has to move to a new family after their issues are resolved. Fortunately, Cody was welcomed by a large loving family.

John was amazed at how easily Cody was able to integrate himself into his new home. Behind all the fears and anxiety, Cody was full of love to give. John described him as a tank full of love and affection.